The clang of the morning bell did not wake Solange up. She’d already been awake for the most part of the last hour,  lying on her back in her top bunk bed, dreading this very moment. The moment when that bell would ring. Dreading it because it meant she would have to wake up, fix her bed and go take a bath. That was, after all, the routine performed by thousands of girls like her who attended boarding schools in the English-speaking Northwest and Southwest regions of Cameroon.
They were a privileged group, these boarding school girls. Religious boarding institutions provided the best available education in English-speaking Cameroon. Parents who could afford the monstrously expensive tuition  sent their children to these schools for 8 out of 12 months a year, confident that at the end of the seven years it took to acquire a secondary and high school education in Cameroon, they would emerge after the Advance Level  General Certificate of Education exam, as some of the most learned, moral and principled students in the country. Students able to thrive in any tertiary education system in the world. They were right to have that expectation. A near majority of the most prolific English speaking Cameroonian women were products of such boarding schools as Saker Baptist College,  Our Lady Of Lourdes College and  Queen of the Holy Rosary College. The men usually came from Sacred Heart College,  St. Joseph’s College, Bishop Rogan’s. There were a couple of co-ed colleges: Baptist High School, Buea, Presbytarian Secondary School, Mankon, Christ the King College, St Augustine’s, St. Bede’s, Joseph Merrick. Parents loved them all and sent their children to these schools in droves from all over the country and even abroad.
This was Solange’s fourth year at Saker Baptist College or just Saker as it was called. Her parents had chosen the school because being fervent Baptist turned Pentecostal Christians, they’d wanted their daughter not only to get an education, but to get it in an environment which espoused their religious beliefs.
Also, they wanted a boy free environment.
Stomach tight with apprehension, she rolled over and swung her legs over the side, careful not to hit Cathy the girl in the bed below hers. Cathy had sprung into action the moment she’d heard the bell and was already in the final stages of making her bed. Cathy Ngwa was a newly arrived lower sixth student. It was the  first term of the year, which meant the upper sixth students, the school prefects, were out for the blood of lower sixth students. This was a familiar power struggle. It would ease out by the end of the term after friendships had formed and ultimately end after “hand over,” the not so creative name given to describe the period when upper sixth students handed over prefect positions to lower sixth students…who in turn became out for every body else’s blood.
The dormitory buzzed with the familiar sounds of a boarding school morning. Beds squeaking, foot steps, the rattle of metal and plastic buckets and titi pails, water splashing. Metal trunks, where personal belongings were stored snapped open and closed, bed sheets rustling and the sound of beds dragging on cement floors as they were made, muffled conversations:
“Keep a space for me!”
“Hurry up! The line at the tap is getting long.”
“WHO STOLE MY WATER?!”  A lament which was as sure to be heard as the sun was to rise.
“Eiiissh! Mukete! You peed again?” An upper sixth student, voice high with embarrassment and frustration scolded one of her petites, as the first year students placed in the care of upper sixth students were called. . Everyone within earshot burst out laughing. The poor child, who couldn’t have been older than nine years old, stood next to her soiled bed, head hung in shame while her dulong ( as the upper sixth guardians were referred to)  ranted. “How many times have I told you that if you want to pee at night, you can wake me up to go with you? Na which kind bad luck this? Man go die smell inside this dormitory.” (What kind of bad luck is this? This stink is going to be the death of us, in this dormitory).
All these sights and sounds  faded to the background as Solange focused on bracing herself for what was to come. She made her bed quietly and found herself praying under her breath as she did.

She lapsed into praying in tongues as she was wont to do when she felt really strongly about what she was praying about. Eventually she felt her chest swell and a feeling of peace came over her. It was as if God had sent a healing balm of reassurance to her to tell her  that everything was going to be alright.

“Takang! Hurry up and go take a bath!”  The dormitory captain yelled at her using her family name as was the tradition in Saker. “Dey for dey di pray. God no go helep you if you late” ( Stand there praying. God will not help you if you’re late)

Emboldened by her prayers and sure that God was on her side, Solange rushed through finishing making her bed and grabbed her toiletries. She found her bucket of water where she left it the night before. It was untouched. Thank you God! She thought, taking it as one more sign that God indeed was on her side. The trip to the bathrooms was short. Her dormitory, Martin, shared a wall with the bathroom. Keeping her eyes down, she found a space and settled into the familiar routine. She poured a little water on the cover of her bucket where she’d put some Omo (powdered laundry detergent) and took off her panties from the night before to soak them in the solution. She’d wash and rinse them with whatever water was left from her bath. Next, she put tooth paste on her tooth brush and stood up straight to brush her teeth, Her gaze taking in the bath room. The bathroom full of naked girls. Her vision filled with breasts, curved backs, butts, pubic areas, arms,  flat stomachs, thighs, dark skin, fair skin….

Solange quickly averted her eyes but the damage was already done. The memory was stamped indelibly on her minds eye. The harder she tried not to focus on it, the more it became the only thing she could focus on. She squeezed her eyes shut and brushed her teeth furiously.

To her horror, she felt the familiar softening in her groin, followed by the tingles. Goosebumps suffused her body and her nipples hardened.

The demons were back.

My God, my God…. why have you forsaken me? 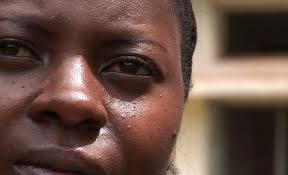 Personal and professional perspectives on social inequalities, difference and oppression.