A recent interaction with a fellow Cameroonian of the male species left me feeling really salty. The pomposity of this guy, the way he tried to patronize me (one of my biggest pet peeves), the pretense of superiority which left him looking desperately silly… it rankled.  Of course, I applied the philosophy of #JeTeBloque to his ass. Why argue with a fool who will drag you down to his level and beat you with experience?

I thought about it and wondered why quite a few of my interactions with the males of my country ended like this. Maybe I’m just the arrogant, trouble making bitch some folks seem to think I am. Or maybe the fact that I clash with them is symptomatic of a bigger problem: the inability of our men to deal with  girl who is not particularly trying to impress them. I laughed and shrugged it off in the end.

And then this morning three of my friends disclosed recent conversations they have had with males of the same species, which got me pissed off all over again. You see folks, it’s not just me. I mean I am abrasive and irritable and I don’t suffer fools. But these ladies are some of the most level headed  women I know. The way these guys talked to them… belittled them, patronized them and insulted their intelligence… Let’s just say somebody would have been burying a son if that was me.

Quite a few of you menfolk have told me you’d be more willing to listen to me if I changed my approach and I still say kiss my ass. Because the truth, if you are willing to listen to it, is that you don’t have a problem with my approach. You have a problem with the fact that I am even daring to talk at all and openly criticizing your kind, because that is not what women from our part of the world do. The African women you are used to are mostly submissive and docile. Too focused on surviving in a world rigged by male dominance to truly challenge you beyond the acceptable levels of what is considered a “strong woman.” You know, that girl who will speak her mind and all but ultimately will allow herself to be silenced because there are ways in which a woman should express herself and whatever she does she must remain respectable. You have a problem with the fact that I am not toeing the line. That I have stopped trying to reason with you (as if you even have the least interest in hearing what I am saying, as drunk as you are on your notions of male superiority). Why do I say this? Because even when we try to reason with you, you dismiss us like what we have to say doesn’t matter and if we get angry… Oooooh we’re being emotional, as if we don’t have the right to be angry.

Fuck that and fuck you.

You, a christian man, try to force yourself on a woman. When she fights you off, you say it was God protecting his child (i.e you) from temptation? What in the entire hell? I hope you are sterile or have low sperm motility. You shouldn’t breed and perpetuate that fuckery. And now it is all OK and you and her are cool because you have asked God for forgiveness? What about her? Have you asked her for forgiveness? And then you have the nerve to lecture her on the evil that is the feminist movement? A movement which exists to protect women from hypocritical, morally corrupt predators like you? I hope your penis shrivels up and falls off. Bastard.

Oh let’s not forget about this other one who has the unmitigated bile to tell my girl  not to question the story the guy she’s been dating has been telling her about a girl in his past, who really isn’t in his past. His reason? “If you rock the boat too much he might start wondering why you are still single at your age.”  Na who di born these mugu them? Who models manhood for you cretins? Seriously?

Or the one who I asked to not grind his erection on me while were out dancing because it made me uncomfortable, who then asked me how it was his problem that I feel uncomfortable. 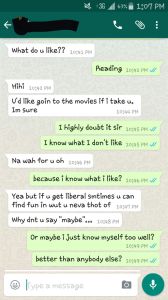 Conversation moves on… you’re trying to chat this girl up and she points out that you have different belief systems which might makes things difficult. You then insist that she couldn’t possibly have arrived at her current way of seeing things by herself.

You act innocent…. or maybe you’re really just clueless. She’s gracious and patient enough to keep talking to you and her work comes up… She explains what she does to you.

How is it some of you do not know when to quit? When to back the fuck off and leave a woman alone when she has made it clear she really doesn’t want to interact with you? What did you eat today? Are you talking to someone in nursery school?

The problem is many of you will read this and get offended because I am “generalizing” but excuse me, when crap like this keeps happening over and over, YOU maybe different (or think you are) but there are enough of your brothers out there who simply are ruining it for you. Go and get them.

By the way, she’s going to be a doctor. Asshole.

Personal and professional perspectives on social inequalities, difference and oppression.